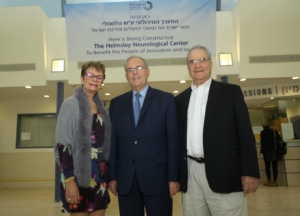 ‘The fate of many stroke, neurological and neurosurgical patients in Jerusalem is being changed today’

The creation of the new Helmsley Neurological Center at Shaare Zedek Medical Center was marked with great excitement at a ceremony at the Hospital on Wednesday, Nov. 30, 2016. With its opening, Shaare Zedek will be considered a Level-One Trauma Center, with neurosurgery, neuroradiology, and neurological care including Jerusalem’s new Stroke Unit.

New York’s The Leona M. and Harry B. Helmsley Charitable Trust gave the largest donation of $5 million to the new center. One of the three trustees of the organization, attorney Sandy Frankel, and his wife, Ruth, attended yesterday’s ceremony. He shared that billionaire businessman Harry Helmsley was not Jewish and that neither he nor his wife Leona was ever in Israel. Yet, he said, “[It is a] privilege and high honor to participate in a project like this and all of our projects in Israel. It makes you feel really good inside…[Israel and its people] mean so much to us. We think about you all the time. You face a tsunami of hatred…You are a true democracy in a sea of turmoil. You should know that you are not alone. Millions of Americans think of you all the time.”

Strokes are the third-biggest cause of death in Israel after cancer and heart disease. Prof. Jonathan Halevy, Shaare Zedek’s Director General, explained, “There are tens of billions of neurons in the brain, and after an ischemic stroke [caused by a clot in a vessel], one loses two million nerve cells every minute. If you can get patients to a computerized tomography [CT scan] unit to diagnose the stroke and give medication to melt the stroke, you can prevent or at least minimize the resulting disability,… The opening of this center [is a] milestone in our 114-year history. The fate of many stroke, neurological and neurosurgical patients in Jerusalem is being changed today.” 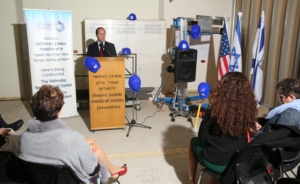 Association and Vice President of the World Stroke Organization, who has a worldwide reputation in stroke treatment and research, is the director and coordinator of the Helmsley Neurological Center.

Jerusalem Mayor Nir Barkat, who attended the ceremony, said that it was amazing to see patients being rushed to the hospital with a stroke and to see those who could be treated walk out on their own feet, without a disability.