A Doctor from Teaneck, NJ Returns to Shaare Zedek for His Annual Stint as a Very Highly-Skilled Volunteer — But This Time Something is Different 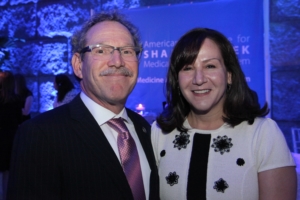 In the 1950s, my Aunt Miriam and Uncle Zvi made aliyah to an agricultural moshav after undergoing a few months of training on a model farm (“hachshara“) in southern New Jersey. They were following in the footsteps of another uncle, who came to fight in the 1948 War of Independence and stayed for good. Zvi was thrilled with his high school teaching job and farming chores, but  Miriam was beaten down by waiting daily in long lines at the grocer, post office and bank in sweltering heat. They returned to the US, disappointed and disenchanted after just 18 months.

Over the years, a number of friends uprooted their families from comfortable suburban lives in the US in pursuit of the Zionist dream. For some, the economic and social challenges for themselves and their children were insurmountable. I greatly admired these friends for their courage and felt their anguish when things didn’t work out and they returned to the States.

I have chosen an easier path for myself. I will take the citizenship without the hardship (“Aliyah Lite”). I will advocate for Israel from America, speaking as an American and an Israeli. I’ve always had multiple identities: traditional modern Jew, husband, father,  doctor, student of 20th Century history and art, dilettante, man of letters, long distance runner. I’m proud to add “Israeli” to this list.

Each of us has multiple axes of identification, including religious, political, nationalistic and linguistic. To ready myself for aliyah, I have struggled to become a “Hebrew Man” (great song by Ehud Banai, by the way). In the last month, Debbie and I binge-watched three Israeli TV series (Fauda, Mossad 101 and Shtisel), purportedly to improve our Hebrew language skills. I have been regularly listening to live-streamed Galgalatz radio for hourly news, pop music and traffic updates (“fender bender reported at ‘Ingathering of the Exiles’ interchange”).

There is a modern Hebrew expression that “all schedules are rough drafts.” Last night, I was expecting a stress-free “economy-plus” direct flight to Tel Aviv for my return to Zion. Not so fast. A blizzard forecast for the morning after the flight was deemed a good enough reason for the airline to cancel the flight. This wandering Jew (and spouse) was then rebooked on a 17-hour odyssey from JFK to London to Frankfurt to Tel Aviv. After landing in Frankfurt,  the city where my Goldschmidt and Posen forebears lived from the 1700s until the passage of the Nuremberg  Laws, I put on my tefillin and said the Sh’ma. Afterward, I bought a soda from a Kurdish vendor who expects his people to have their own country within ten years. Ours is not the only diaspora.

Postscript:  I was originally scheduled for airport processing by representatives of the Ministries of Absorption and Interior at 4:00 PM. When my plane landed at 11:00 PM, I was happy to find that these offices work 24 hours a day, greeting and welcoming new olim day and night. I was promptly issued my National Identification Card, enrolled in one of the national health insurance plans and given three gifts: a heavy blanket, a cell phone SIM card with 200 minutes of talk time and some spending money. My Israeli daughter tells me that I will never have as smooth a visit to an Israeli government office as I did at Ben Gurion at midnight.

What started as a practical need for Israeli citizenship has evolved into a spiritual act of affirming solidarity with my people; maybe other  Americans will follow me on  “Aliyah Lite.” On my first day as an Israeli, I picked Jaffa oranges with my grandsons at a grove near the Mediterranean coast, to be donated to a food bank, re-enacting the labor done by pioneering colonists 100 years ago.

Dr. Howard Zvi Goldschmidt is a cardiologist subspecializing in interventional echocardiography at The Valley Hospital in Ridgewood, NJ. His family has a long association with Shaare Zedek Medical Center. Dr. Goldschmidt’s grandfather, Carl Goldschmidt, was a member of the board in the 1960’s and was posthumously honored at an annual dinner. His maternal grandfather was a classmate of Shaare Zedek’s second director-general, Dr. Falk Schlesinger, in Hamburg, and hosted him in New York. Dr. Goldschmidt was recently the Rofeh Yedid honoree at the 2016 Heart of Jerusalem dinner of the American Committee for Shaare Zedek Medical Center. He and his wife Debbie live in Teaneck, N.J. Their daughter, son-in-law and three grandchildren reside in Modi’in.

By admin|February 22nd, 2017|Dr. Howie Goldschmidt's Blog, News|Comments Off on Return To Zion