Shaare Zedek Medical Center in Jerusalem fields a world-class, lifesaving ‘dream team’ every day, but members of Shaare Zedek’s newest dream team didn’t go to medical school. Instead, they honed their own considerable skills on professional and college basketball courts around the world. 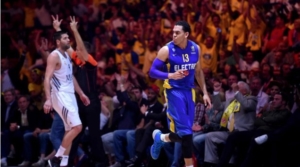 David Blu (right) is leading the Shaare Zedek team competing for $2-million in The Basketball Tournament on ESPN. Photo by Noam Galai

The American Committee for Shaare Zedek Medical Center in Jerusalem is proud to participate in this year’s The Basketball Tournament on ESPN, and will compete for a winner-take-all $2 million cash prize. In accordance with the rules of the competition, Shaare Zedek has drafted an outstanding team including players who were very successful in the NBA, the Euro League and top-rated college programs. The rules also allow for fan participation, and for teams to advance in the competition based, in part, on how many fans they have signed up online by July 1, 2016.

Members of Team Shaare Zedek include captain David Blu, a 6’7” Maccabi Tel Aviv star who was a starter at USC from his sophomore year; Australian Cory Reader, 7’0”, who played professional ball for nine years including a stint with the LA Clippers; Chidi Ajufo, 6’6”, who starred for the Amstetten Falcons in Austria, the Essex Pirates in the UK, and S.C. Fukinese in Hong Kong; 6’1” Shawn Weinstein, who played for Elitzur Maccabi Netanya, as well as Talk-n-Text Tropang Texters in the Philippines; Jean Baptiste Rugiero, who played for Les Canonizers de Sainte-Marie Metz in France; and Bracin Skywalker, an Olympic hopeful who plays in the JBL National Pro-Am Basketball League on a team sponsored by LA Laker Metta World Peace. Two world-class businessmen who are also talented basketball players are also competing on Shaare Zedek’s behalf. They are Michael Fallas, owner of Fallas National Stores, and Jeff Feinberg, managing director of JLF Asset Management. Additional players are set to join. [Read more about our team here]

Qualifying rounds are underway now, until June 1st. The first games begin in Los Angeles in July, followed by semifinals in Philadelphia and the Final Four in New York, with the championship game to be telecast live on ESPN.

“Shaare Zedek has a real shot at winning,” Team Captain David Blu believes. Driving his game on behalf of Shaare Zedek, he shared, is the experience of losing his mother to cancer at 14. “We have a great squad of players, all eager to do good for the hospital. I played in The Basketball Tournament last year and I know what we are up against. We have a great team that can win this whole thing if we stay healthy and continue to bond as a unit.”

But the competition is more than a basketball tournament — it’s also a social media contest, and fans have the power to improve their team’s placement by signing up and voting online, and then following along.

“We would like to encourage and push our fans and supporters to register at http://bit.ly/ACSZbasketball and vote for our team. That will take us half the distance to winning that $2,000,000 prize for the people of Jerusalem, because the top vote getters play the lowest-ranked teams in the tournament,” says Shawn Weinstein, defender of the year at Elitzur Maccabi Netanya and Talk n Text Tropang Texters in the Philippines.

“We put this team together to unite supporters of Shaare Zedek and professional athletes around a cause that’s dear to them all, and to bring national and international awareness to our work in Jerusalem,” says Barak Raviv, who serves as Chair of the Western Region American Committee for Shaare Zedek Medical Center in Jerusalem Campaign Advisory Council.

Known as The Hospital with a Heart, Shaare Zedek Medical Center in Jerusalem is a thousand-bed hospital that tended to 140,000 visits to its ER last year; 540,000 visits to its outpatient clinics; and to 85,000 hospital admissions. Among those are the mothers of 22,400 babies born at Shaare Zedek in 2015 (that’s not a typo — there really were 22,400 births on Shaare Zedek’s two campuses last year). More than 500 babies have been born free of genetic diseases their parents carry, since the inception of Shaare Zedek’s leading pre-implantation genetic diagnosis (PGD) program. With the new Wilf Children’s Hospital at Shaare Zedek now fully operational, and plans progressing quickly for a full-service Neurological Institute including a Stroke Center, the team has much to play for in its quest for a $2 million prize from ESPN.

“Ultimately we play to strengthen a community committed to making sure the people of Jerusalem and Israel have access to the lifesaving and life improving care that Shaare Zedek provides,” said Stephen Matloff, a member of Shaare Zedek’s International Board of Governors, and of the national board of the American Committee for Shaare Zedek Medical Center.

Cory Reader, former center for the LA Clippers, now playing for Team Shaare Zedek, agrees: “We are doing this for Jerusalem.”

Fans can register to vote at: http://bit.ly/ACSZbasketball