The Shaare Zedek Emergency Room: A New Standard At Double The Size

The Shaare Zedek Emergency Room: A New Standard At Double The Size 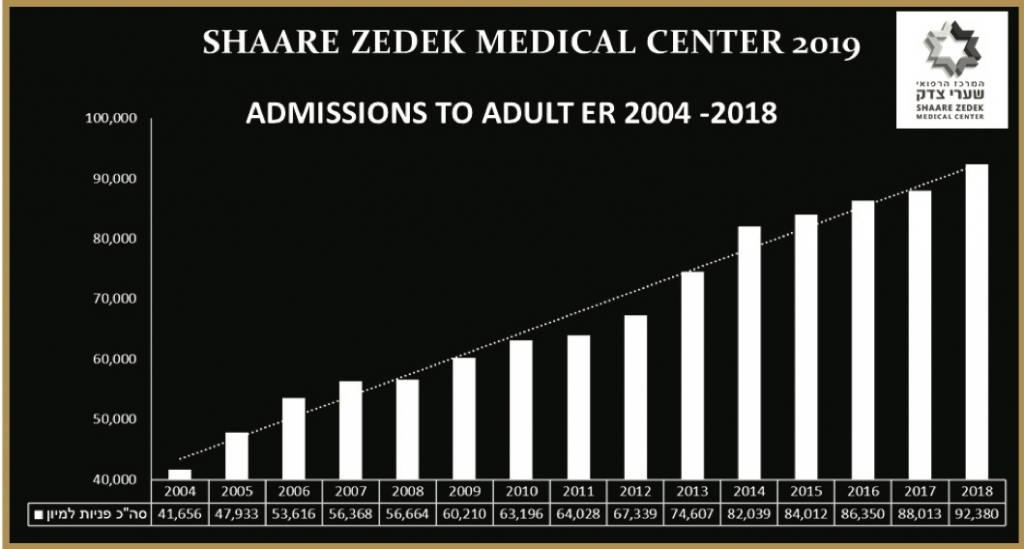 Shaare Zedek has launched a bold campaign to double the size of its ER as demand for Emergency Room services rapidly increases. The Hospital will more than double the square footage of its emergency department with the addition of an all-new urgent-care pavilion. Today, the Weinstock Department of Emergency Medicine on the Fanya Gottesfeld Heller Floor includes 43 beds in approximately 16,000 square feet. The new Pavilion will add an additional 61 beds and 18,000 square feet. When this sophisticated, state-of-the-art facility first opened its doors it was treating 41,000 patients a year. Just fifteen years later the Hospital now sees more than 92,000 patients a year in our ER.

As the most centrally located hospital in Jerusalem, Shaare Zedek plays the most pivotal role in responding to major disasters and terrorist attacks. Spurred on by our reputation as the “Hospital with a Heart” and the surge in Jerusalem’s population, our Urgent Care Response System has significantly increased its activities resulting in Shaare Zedek’s status as the largest and fastest-growing comprehensive emergency service in the greater Jerusalem area. When it comes to trauma and emergency care, every minute — indeed often every second — matters.

PLEASE JOIN US IN BRINGING THIS CRITICAL VISION TO FRUITION.

By admin|September 11th, 2019|Announcements, Emergency Room, News|Comments Off on The Shaare Zedek Emergency Room: A New Standard At Double The Size

Manage Cookie Consent
To provide the best experiences, we use technologies like cookies to store and/or access device information. Consenting to these technologies will allow us to process data such as browsing behavior or unique IDs on this site. Not consenting or withdrawing consent, may adversely affect certain features and functions.
Manage options Manage services Manage vendors Read more about these purposes
View preferences
{title} {title} {title}